When your kids looks like this and it’s okay!! 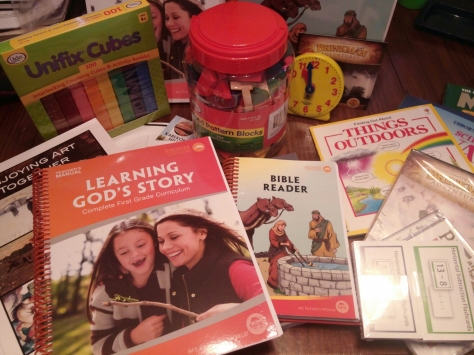 Today I got My Father’s World 1st grade curriculum for my oldest son. We won’t start until fall of this year but it has been between this or Sonlight for about a year and I just couldn’t go back and forth in my head anymore (I’m about to go nuts!) so I went ahead and jumped the gun and bought MFW.

My reasonings for this was because they both have great reviews, they both have a schedule laid out for me, the only difference and really deciding factor was the price. This being our first full year of homeschooling I just couldn’t imagine shelling out almost a thousand dollars when I’m not sure how it will even work for us and at this time I’m only planning on homeschooling the elementary years but I’m always open to whatever comes our way.

All that being said I got this box of books and worksheets and ideas and activities and although there is a laid out plan I can’t help but feel overwhelmed. I’m sure once I get it organized I will feel a little better. Lets hope anyways.

So what are your thoughts? Has anyone ever used or is using My Father’s World? How does it compare to other curriculums? I realize that I have already bought it but would still love to hear some feedback.

Here’s to over preparation and uneasiness!;) 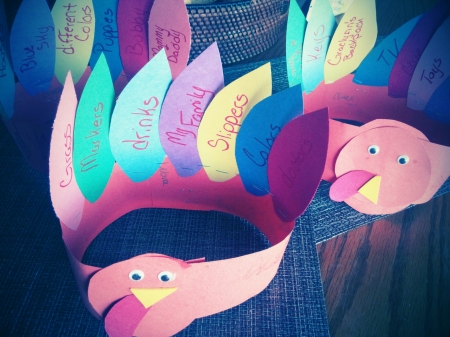 Today these happy turkeys are thankful for slippers, puppies, the ground, colors, markers, tv, bubbies, mommy and daddy, the sky, keys, backpacks, doctors, toys, drinks, houses and grass.
What my son isn’t very thankful for are t-shirts. We are lucky we’ve got shorts on today.

Moral of the story: Lets be thankful the way children are thankful, in the simple most lovely way possible,  BE THANKFUL FOR EVERYTHING! (Except maybe t-shirts!)

Here’s to a Thanksgiving full of thanks.

” I love you much brother.”

These were the exact words my 2 year old daughter said to her 5 month old baby brother. It wasn’t a moment of cuddles or joy, she was just playing outside and on her way past me and baby bubba on the deck she stopped and got really really close to his face, their snot bubbles inevitably touching. She put her hand on his cheek and whispered “I love you much brother.”

Talk about a mother’s heart breaking in an oh so good kind of way. She looked up at me with a big smile on her face, baby bubba had a smile too. All I could do was kiss her forehead and say “I love you much my darling.” Snot bubbles and all. She was off in a flash. The moment gone but not forgotten. Oh how simple and profound to love like a child loves.

I love you much my darling. 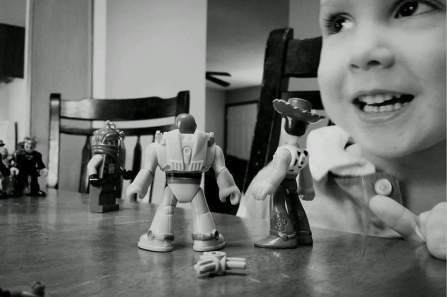 Today when my son asked me to go to his room to play with him and his “guys” I followed him in and sat down without much thought. Almost immediately I could feel the disarray of his room glaring at me from every corner. A random bunched up sock lay in the middle of the room, shoes piled up under the bed, toy buckets tipped over. My first instinct was to clean while I played. I’m pretty sure that’s what I usually end up doing when I “play” in my kids rooms. I end up cleaning. Today I just played. Buzz and Woody were superheros today, they had a mission to save Batman and Robin from Joker’s Lair. Today I really enjoyed the playful part of being a parent. I left the sock on the floor and the shoes under the bed for another day and I played.

We had an interesting start of 2015. In January we took our daughter to her very first eye doctor. What prompted us to do this was what we noticed about a month earlier. One morning she woke up and her right eye was turning inwards. I noticed but thought maybe she was just tired and her not even being two yet I had heard of that happening but within a day or two everyone we came across that actually knew us asked what was wrong with her eye and that’s when I started to panic. I probably wouldn’t have so quickly but on my husbands side there are people in his family that have had this happen. His nephew is actually legally blind in the turned in eye because it wasn’t noticed in time and taken care of.

So I made a few phone calls to her pediatrician, who referred us to an AMAZING eye doctor who then checked her eyes and found that her site was fine but that she may be seeing double vision because of the turning in. They then tell me this is called Strabismus and that the eye needed to be corrected so first things first… Glasses! And boy were the glasses cute! I mean this girl could pull off glasses so it wasn’t too tragic if this was just what she had to do. My husband wears glasses as does millions of other people, we were kinda hoping that glasses would do the trick.

A few months passed and her eye continued turning in so I tried to patch the working eye and while it made her turned in eye appear straight when it was covering the opposite eye it still wasn’t doing much to strengthen that muscle.

It’s devastating when you get the news that your child has to have surgery. I don’t care if it’s the simplest surgery on the planet, it is still not something you want to happen. We are lucky because we had some amazing doctors and while we did have to do a bit of traveling for the surgery and the post op she came through just fine. I’m not gonna lie and say it wasn’t trying. I mean a two year old having their eyes cut into is pretty traumatic. The surgery pretty much meant they had to go in and shorten or lengthen the muscles in her eyes to straighten them out. They ended up having to go in on both eyes. It luckily only took about an hour and a half for the actual surgery and they released us about 2 hours later which I wish now they wouldnt have.

The ride home was terrible. The sun had a huge affect on her eyes, about an hour into our drive home she just lost it. The whites of her eyes were already blood red and would be for about two weeks but her tears were what pulled my heart strings. They were filled with blood and the drainage from her nose was bloody. It was heartbreaking. I mean this poor girl was just a mess and mommy couldn’t do a thing about it. It was horrible. I rocked her in a Walmart parking lot for about 30 minutes before she finally fell asleep in my arms. I slipped her back into her seat and we hit the road again. Luckily she slept the next two hours without much disturbance. Hubby and I sighed in relief when we pulled into our driveway.

Home with our baby.

Now, I realize children have gone through much worse so I am so grateful that it was just a corrective surgery and that the risks were very minimal and I feel blessed everyday that I see her eyes working together to look at me. I feel blessed that her doctor was so amazing that she still talks about him. She still prays and thanks God for helping the doctor fix her eyes. (Boy do I love hearing that prayer.) We have one last check up appointment with her local eye doctor just to make sure her eye sight is still good and hopefully the seeing double is taken care of.

No matter what goes on with our children, big or small, it hurts our hearts for them. It reminds us to be grateful for everyday that is given to us and to enjoy our children and our family as much as possible. My daughter is alright but we won’t ever forget the worry we felt and the faith that had to work overtime to get us through. We will never forget the strength of our little one and the pure and genuine gratitude that she still shows God by thanking him most nights in prayer. It is a wonderful thing to see the love and faith through a child’s eyes.